Hyde United Board of Directors has approved plans for a new structure of the Football Management & Coaching Staff at the Club. This will provide more effective direction and communication on all footballing matters across our different departments.

The new structure will include;- 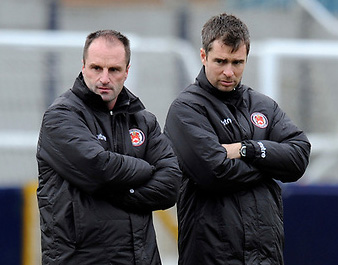 “I am happy and excited to confirm my new role as the Sporting Director of Hyde United Football Club, a club that over the last few years has become a family to me, a club I have gained a lot of friendships and amazing memories along the way.

I have been studying the sporting director role now for 3 years and have enrolled on The VSI Masters in sports directorship at Salford University of which I am 1 year into a 2-year course. I believe I have learned so much over the last year that I can bring to the role and especially after losing our friend, mentor and leader Mark Worthington I wanted to set about creating the success that the big man set out to do three years ago.

This role will give me the ability to do that as well as keep Mark’s legacy alive within the club. I feel with my new role as a Sporting Director I am able to play a huge part in the off the field activities such as working closely with and supporting the board and office staff as well as creating more commercial and marketing opportunities and acting upon unused areas that can help create a stronger fan and community based club.

I will also support and oversee the football club 1st team, Academy, International Academy, Ladies and Junior Teams all to keep strong but add strength to these areas. I will support Dave, John, Gaz, Chris, Stef and David in the on the pitch football matters as and when they need my support. The main aim is to strengthen the club’s future and help make the club sustainable and successful and I will do everything in my power to ensure this happens. I believe the new structure is one that will come into non-league more in the next few years with this already proven, tried and tested in the premier league, football league and most European clubs.

All I ask of our loyal and trusted supporters now is to come out in your numbers to get your season tickets and support Dave and the team for the new season ahead.”

“I am delighted to take on the managers role. I’ve made no secret of my desire to become a manager and there is no better place for me to start. There is a fantastic management team in place to face the challenges ahead in a very competitive league.

The football club is in transition. We have lost our friend, leader and CEO in Mark Worthington. Mark played a huge role in the recent success we have had and it’s up to everyone at the club to now step up and continue his good work. Alongside the board, the new structure will provide stability off the pitch at this crucial time while looking to provide a team that the fans can be proud of on the pitch. We will look to bring all departments of the football club closer together including the academy, the supporters, the community and our newly formed junior teams.

Our work has already started and we look forward to building a team and football club that the town can be proud of. It’s an exciting time and I’m proud to be part of Hyde United.”