"> The Day A Star Was Born – Hyde United
Skip to content

The Day A Star Was Born

An Article by Mike Pavasovic 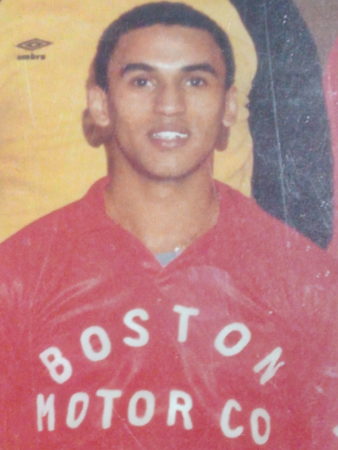 BACK in September, a significant club anniversary passed by unnoticed. It was 40 years since George Oghani first took the field for us. For many of those who remember him, he will always remain Hyde United’s greatest player.

George was signed at a time when black lads were only just starting to come through at the top level. Viv Anderson was playing for Notts Forest and England, while West Brom led the way with the so-called Three Degrees: Brendon Batson, Laurie Cunningham and Cyrille Regis.

So you can imagine the chatter among the fans before the 1-1 draw at Burscough when they learned the Tigers had signed their first black player. All we knew was that he was a young lad and had come from Bury. We didn’t even know how to pronounce his name. I wrongly assumed he was called “Ogany” as in mahogany. It didn’t take long for us to get to know him well.

George had been recommended to Hyde United by John Heap who had been secretary at Ewen Fields before moving to Gigg Lane. George, by his own admission, was a troubled youth. He might easily have slipped into a life of crime but was saved by football, by Hyde United, and, unlikely as it might sound, by Tigers manager Les Sutton.

Sutty and George had, shall we say, a tempestuous relationship. They often came close to blows in the dressing room and on more than one occasion George ripped off his shirt and insisted he wouldn’t go out for the second half. Yet he always did. And his relationship with Les, whom he clearly saw as a father figure, is still strong today.

It took seven games before George got on the scoresheet but his ability quickly became apparent. Not only was he fast and skilful, but he was strong and fearless too. By the end of the season he had hit 14 goals and come to embody the rebirth of Hyde United. In 1970, the club was on life-support having almost bankrupted itself by spending two seasons in the new Northern Premier League. As the 1980-81 campaign started the Tigers were about to reassert themselves as a power in non-league football with George Oghani leading the way.

He was top scorer in the following three seasons with 19, 32 and 28 goals respectively including five hat-tricks. His most notable performance possibly came in 3-0 FA Cup victory over Runcorn — then a major force — after which he was whisked away to Burnden Park and signed for Bolton Wanderers. Pete O’Brien brought him back to Ewen Fields for one final match on New Year’s Eve, 1989.

George will always be a Hyde United legend for people of my generation. If we had a hall of fame, he would surely be the first person in it ahead of the many other stars we’ve had since day-one way back in 1885. He personifies the inclusivity we’re so proud of, and the entertaining and attacking football we hold so dear.

If you never got the chance to see George play, just ask your nearest supporter who’s 55-plus. There are so many stories to tell of his prowess and the victories he led us to. It’s always great to see him on his periodic visits, usually with Tony Steenson and Les Sutton.

For the record, black players have been in the English game since at least 1889 when Arthur Wharton signed professional forms at Rotherham Town. The comedian Charlie Williams played for Doncaster in the Fifties. Dennis Walker made one appearance for Manchester United at the end of the 1962-63 season, while Albert Johanneson appeared on the wing for Leeds soon after, and Clyde Best was a striker for West Ham from 1968 to 1975.