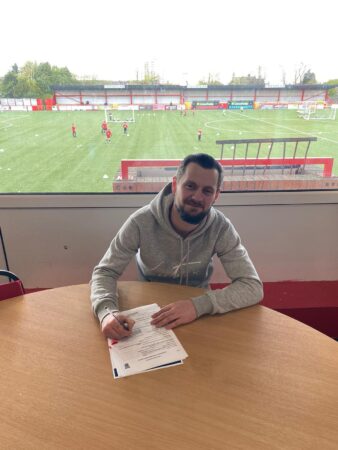 Hyde United are delighted to announce that captain Tom Pratt have signed on for the 2021/22 season. Pratt joined the Tigers from Trafford in 2017 and has gone on to score 42 goals in 127 appearances across all competitions.

Manager Dave McGurk is looking forward to an uninterrupted 2021/22 season and has been working hard over the enforced break to put together an exciting squad capable of challenging the top half of the league.

In particular he is pleased with the signing of the skipper.

“Pratty is the first of many to commit for the 2021/22 season. He is our skipper and has been pivotal to everything we’ve done since he joined.

We’ve had to fend off interest in him which happens with any good player but I’m delighted that he’s agreed to work with us next season.

We’ve had really positive talks with the players. I’m hoping to announce more deals over the coming days and months. I’m looking at adding five or six players to the group but we have players within the group who will be like new signings as they haven’t played a league game for us yet with the COVID situation.”

“On top of that we have Jordan Fagbola, who is a massive presence for us on and off the pitch, close to a return and will join pre-season from mid-June. Harry Benns is back from his ankle injury and I’ve got high hopes for Harry. Janni Lipka is 100% fit and is raring to go, we have seen his quality again in the last game against Lancaster. They are all like new signings for us.”

“We have agreed deals with a further two players but it’s premature to announce them at this point.”

“Along with the coaching staff I can’t wait to get back. I’ve missed it and hopefully we can complete a full season for the first time as management staff! We will keep you up to date as and when the players agree deals along with any news signings.”

There are no upcoming events.