The Club is pleased to announce that Jon Parkin will be the guest speaker at our Sportsmans Evening on Saturday 16th May 2020.

The South Yorkshire boy has seen and done it all in a footballing life that peaked with promotion to the Premier League and plummeted to the National League North, taking in spells with no fewer than 14 different clubs.

His story is one of a natural goalscorer whose talent is always in demand. His unconventional frame and liking for a lager or ten meant pre-season was always a struggle. His straight-talking style and knack of finding himself in trouble resulted in countless bust-ups with managers. But when patience, cash or contracts ran out, there was always another club ready to take a chance on him.

Along the way there have been battles with booze, betting and depression. Marital breakdown and brushes with the law didn’t help, while thousands of motorway miles were covered in a bid to stay in touch with his Barnsley roots and his beloved son.

There’s also been plenty of mischief. One holidaymaker in Magaluf won’t easily forget what she found in Parkin’s bath while there’s a golf towel in a hospital car park that nobody would want to find.

Parkin has recently released an autobiography – Feed The Beast – pints, pies, and a belly full of Goals to rave reviews described as a riotous account of a footballing career. Famously his normal pre match meal would include fishcake, burger & chips on the night before a game followed by a full English on the Saturday morning.

Tickets are available for £20 per person and includes a pie and peas supper. The night will consist of stories and tales from Jon and a question and answer session plus lots of fun games.

Tickets are expected to sell fast so please contact john@hydeunited.co.uk for more information or you can buy tickets from the club shop from next weekend. 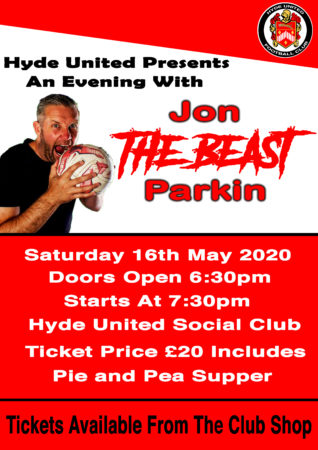