HYDE UNITED JUNIORS MAKE THE FINAL OF THE LEAGUE CUP

The U11’s Reds beat the Middleton Blues 6-3 in the AFC Semi Final League Cup Match, securing their position in the Final.

It was a tough well matched game with equal possession against a worthy opponent, with both teams putting in a solid effort fitting of a semi-final match, and half time saw the game level at 2 goals a piece.  However, Hyde gained momentum in the second half scoring a further 3 goals before Middleton managed to score again, just prior to Hyde securing the final goal of the match before full time. 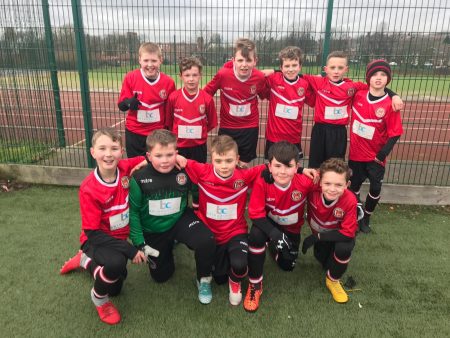 We are so proud of the lads as disregarding illness of 3 of the team and being a player down, their work ethic and effort was unwavering and their determination to win was faultless.

Well done Reds on a well deserved victory and securing your position in the Final. The Final will take place at Curzon Ashton FC on Saturday 25th May 9am Kick-Off

On the same day there were 2 more semi finals taking place, the under 8’s who lost 4-3 by a last minute goal  & the other U11’s team who despite drawing 2-2 in a hard fought game went out on penalties.

Both teams will go on to compete in the Final of the Martin Hett Trophy with the U11’s playing on Sunday 26th May 13:30pm Kick-Off & the U8’s playing on Saturday 11th May 9am Kick-Off, both games will be played at Curzon Ashton FC.