Farsley Celtic ran out close 2-1 winners over Hyde United on a cold day at Ewen Fields to go back to the top of the Evo-Stik Premier table. Farsley, playing in a fluid 3-5-2 formation had the better of the entire first half, with their experienced line up controlling possession and limiting the tigers to rare shots on goal. Despite controlling possession, Farsley themselves couldn’t make the most of the ball with Crook only having to see shots wide from Spencer and Hayhurst. On 29 minutes, two debutants in Adam O’Reilly and Akeem Hinds linked up well down the left hand side but Hinds’ cross couldn’t be poked home by a red shirt. The opener for the visitors arrived only two minutes later when an intelligent counter attack found the ball on the left wing for Hayhurst to whip in a cross into the 6-yard box for Cartman to fire in a free header.

The second half increased the tempo for both sides, with the game becoming end to end and Hyde pushed Farsley back with high pressing from James and O’Reilly. On 55 minutes the tigers almost found their equaliser when a corner by Lipka bounced around in the box and was eventually headed off the line by Ellis. Farsley number 9, James Spencer made a nuisance of himself all afternoon, perhaps going down too easy a few times, according to the irate home crowd. The goal the tigers were searching for arrived on the 63rd minute when a superb run by Olarewaju down the left, skipping past Ellis to whip the ball in the box. A header by James at the back post was followed up by Deane Smalley who flicked the ball over his shoulder and past Trennery. Farsley looked to be on the ropes until the 82nd minute when a dubious free kick was given against Fagbola and the ball ended up going out for a corner. The delivery pinged around in the box, falling to Turner 10 yards from goal to blast the ball low and hard past Crook to seal the win. Late drama was added when Daly was sent off for a second bookable offence, again perhaps questionable. Hyde boss Darren Kelly added after the game he was “delighted with the effort of the young lads” but was “disappointed with the manner of the defeat”. 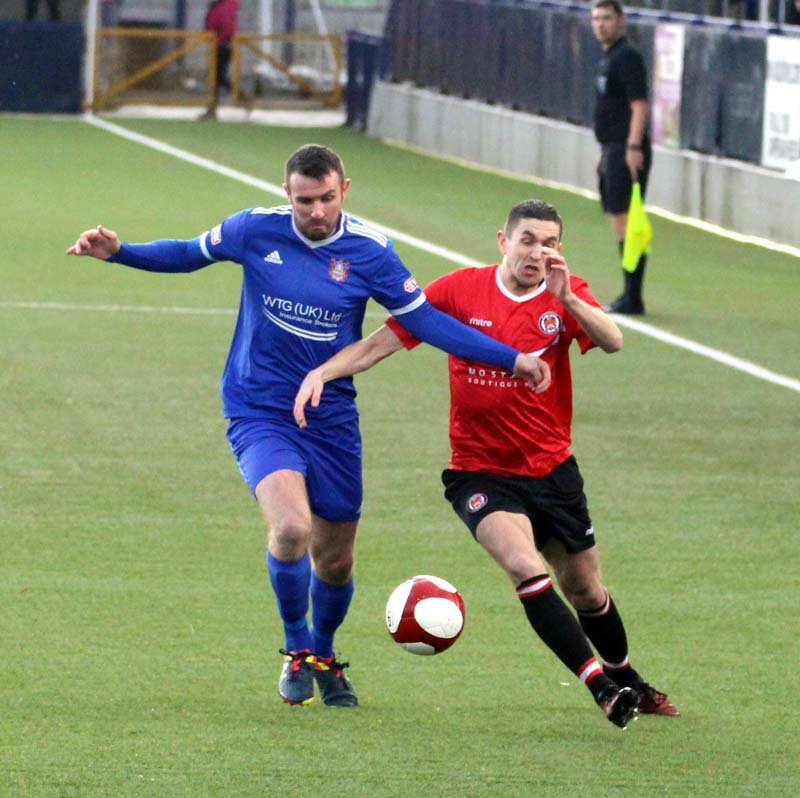