The tigers were at their most ruthless this season as they blew apart a good passing side in South Shields to gain a well-earned 3 points.

The game started with Hyde looking to be on the front foot, pressing Shields high who liked to play out from the back. The opening 10 minutes had a few half chances for both sides but the key moment in the opening 10 was the needless booking for Finnigan for blocking Hyde keeper Crook from taking his goal kick.

Hyde had their first real chance on 15 minutes with good work from Daly, Pratt and Porritt on the right hand side resulting in Pratt placing the ball inches wide of the goal.

The resulting free kick from Brown’s yellow looped onto the crossbar from John McCombe, showing his aerial presence to the Shields back line, which would come into play in the second half.

On 25 minutes Hyde took the lead when a penalty was given from a foul by Shields captain Briggs on Pratt just inside the area. Pratt put away the penalty kick despite a hand from Connell to give Hyde some spirit and belief. 1-0

The next 15 minutes went fairly quiet, chances for Foley and Gillies not troubling Hyde keeper Peter Crook. Hyde’s second came on 42 minutes when a ball over the top bemused keeper Connell who misjudged the ball which fell into the path of the towering Simpson who finished well from a tight angle. 2-0

Just before half time, Shields has their best chance of the game when another good free kick from Gillies found Finnigan who produced a good save from Crook. HT 2-0

The second half saw Shields change it up, choosing to go more direct to try and find the physical presence of Harmison who caused a few aerial problems for the Hyde defence. The plan paid off on 48 minutes when Adams beat Harrison on the right who fired the ball in low, hitting a trailing arm of Tom Pratt, the referee pointing at the spot. Briggs put it away for Shields off both posts to get the away side back in the game. 2-1

Luke Porritt picked up an injury a few minutes later and was replaced by Osebi Abadaki, but the game went tense for 20 minutes with Hyde looking to weather the Shields storm who kept passing the ball trying to find an opening.

They looked to have had an equaliser but for an excellent diving header from Brownhill who stopped Harmison from getting on the scoresheet.

Hyde made their second sub on 73 minutes with Nicky Platt making his home debut replacing Grant Roberts, who didn’t stop pressing the backline of the visitors. That followed with a booking for Harrison for his shove on Adams.

Morse saved his blushes on 75 minutes when his backward header beat Connell, just going wide for a corner. However, it did lead in a goal from the corner when an excellent delivery from Lipka found a free John McCombe who thumped the ball in to add another to his tally! 3-1

Platt made his presence aware to Shields, who dropped off after the 3rd, when his 35-yard attempt beat Connell and just skimmed the crossbar and a near goal of the season.

Daly got a booking for his attempt at pulling back Mouanda and Shields almost got back into it but Crook made the easy save in a relatively quiet game for the Hyde keeper. Adams got his revenge on Harrison when he received a booking for his late challenge, followed by an angry and frustrated second yellow for Carl Finnigan who made numerous tackles on Hyde players and was rightly sent off.

One of the Man of the Match contenders, the hard working and energetic Simpson, was replaced by Chilaka on 90 minutes and Hyde got their 4th with Platt firing over Connell, stranded not for the first time, and into the net to wrap up a well-deserved victory. 4-1

Although Shields didn’t deserve a 4-1 defeat, the tigers definitely deserved a 4-1 victory in their best performance of the season 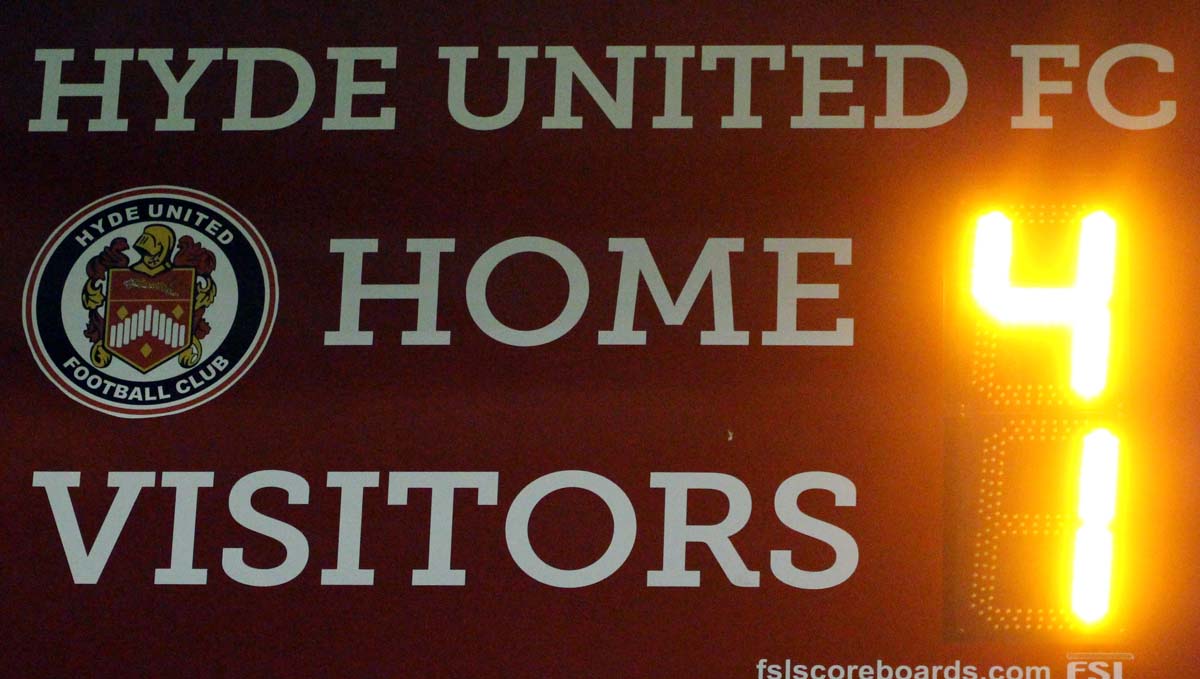